As an international moving company, consider the situation you may occasionally find yourself in, needing to fill a "Rate Analyst" position (i.e. the person whose role is to respond to email rate requests from other movers). Imagine a CV/resume comes across your desk with the following highlights:

One of the key decisions we had to make when designing PricePoint was how to handle net vs gross basis for pricing, an area where our industry has historically lacked uniformity. The overriding consideration for PricePoint was to focus on simplicity, with the conclusion to therefore treat all sizes as gross.

It has long been a top priority to provide PricePoint users with confidentiality protections that far exceed the traditional unsecured pricing practices of email quotes and spreadsheet/document tariffs. Furthering that objective, we have now added a couple more dimensions to your privacy controls.

Agents who file tariffs in PricePoint are now able to choose between three levels of automated privacy control: Moderate (recommended), Strict, or Open.

I have recently approved development of an ambitious new tool to add to PricePoint's growing list of features. The working title of this project is "Corporate Proposal Responder" (CPR for short), and we are aiming to unveil it at the upcoming IAM Annual Meeting in Orlando.

PricePoint's core purpose is to offer instant price quotes from agents, as opposed to the norm of waiting for overnight email quote reply. Although you could simply record the price quote into your file management system, it is highly recommended that you take the simple step of formally saving your quotes within PricePoint, even for non-booked competitive moves. This provides a variety of benefits as follows:

- Tariff Lock: The agent's current tariff is locked in place for that specific quote/customer. Even if the agent later raises their tariff pricing, you can come back and update the quote at a later date with new weight/volume, and PricePoint will still apply the prior locked tariff which has been archived.

- Prevent invoice disputes: Only you and your assigned agent can view the saved quote, which displays full detail on how the quote was calculated. This helps prevent invoice disputes by showing both parties the expected invoice amount, rather than manual calculations which are prone to human error.

- Easy retrieval via Quotes Dashboard: All saved quotes are accessible via your company's private Quotes Dashboard. This is particularly useful when covering for employee illness/holiday absences.

Posted by Unknown at 9:32 AM No comments:

How competitive are OA/DA rates in PricePoint?

This is a fairly complex topic to be considered from a few different angles.

First, price levels and strategies are of course at the sole discretion of each agent user. PricePoint is simply a tool which provides a more efficient, effective, and confidential approach to manage pricing.

Second, regarding confidentiality, those who understand PricePoint's privacy protections should be comfortable offering competitive rates. That said, "competitive" does not necessarily mean absolute lowest price. A competitive price can be regarded as a reasonable "retail" price, possibly with a gray area of discretionary margin which may allow for some discounting on a case-by-case basis.

So if an agent is not offering their absolute rock-bottom rates in PricePoint, does that mean it's a waste of time? Of course not. Let's think it through, say you are trying to book a private transferee shipment, with a total door-to-door cost around $10,000, of which the destination cost in PricePoint is $2000. Even if the agent may potentially be willing to grant a 5% discount if requested, that comes to $100, which represents only a 1% discount on the total move cost of $10,000.

It's fair to say that a 1% price differential is not going to be a deal breaker for the transferee. A booker can be confident using the agent's "standard" PricePoint rate for initial quote, then on the limited instances in which the transferee seeks further negotiation, the booker can seek a possible concession from the agent. Tip: use the PricePoint Message Board for such instances, which is privately accessible to only the agent and booker, and keeps a convenient record of dialogue for both parties.


This is a rational and efficient approach in which PricePoint enables the booker to produce competitive initial quotes as quickly as the same day of survey, without wasting time on composing agent quote request emails and waiting for overnight reply. It is then only a minority of cases that may require further negotiation, at which point the booker has better qualified the quality of the lead, warranting more direct negotiation if necessary.

In sum, a booker of course only wins a fraction of the opportunities quoted on. Therefore a key to success is to minimize time spent on the bids which are not won (aka "losing quickly"), allowing for more time and focus on potential winning bids, and secured customers. PricePoint perfectly supports this winning approach.
Posted by Unknown at 1:33 PM No comments:

We've tried to be thoughtful with the UI in terms of preventing potential conflict between the assumed size and the override, but let us know if any frustrations arise in daily use. Basically, once you manually select a container size, it will remain in place unless you go back into the volume field, which can re-trigger the automated size assumption. This is why we placed the container size field on the far right end.

PricePoint clients now have greater pricing flexibility with managing the somewhat variable detail of Destination THC, which is typically excluded from the cost of freight and paid at destination. However sometimes the DTHC is prepaid with the freight, which is the purpose of the new upgrade.

Originally we always automatically added DTHC into the PricePoint DA cost quotation. The DTHC amount was visible on the the formal quote detail screen, so the Booker could manually deduct the DTHC amount from the quote.

Now we have a toggle switch on the Price Calculator page which allows the Booker to easily include/exclude DTHC from all quotes. The only exception is if the agent has treated the DTHC as a base rate inclusion rather than specifying the amount separately on their tariff (we prefer and request the latter). In such cases, the exception is highlighted as per the following screenshot.

Lastly, the quote detail screen will still display the DTHC amount for reference purposes, but will note it as excluded from the total cost. 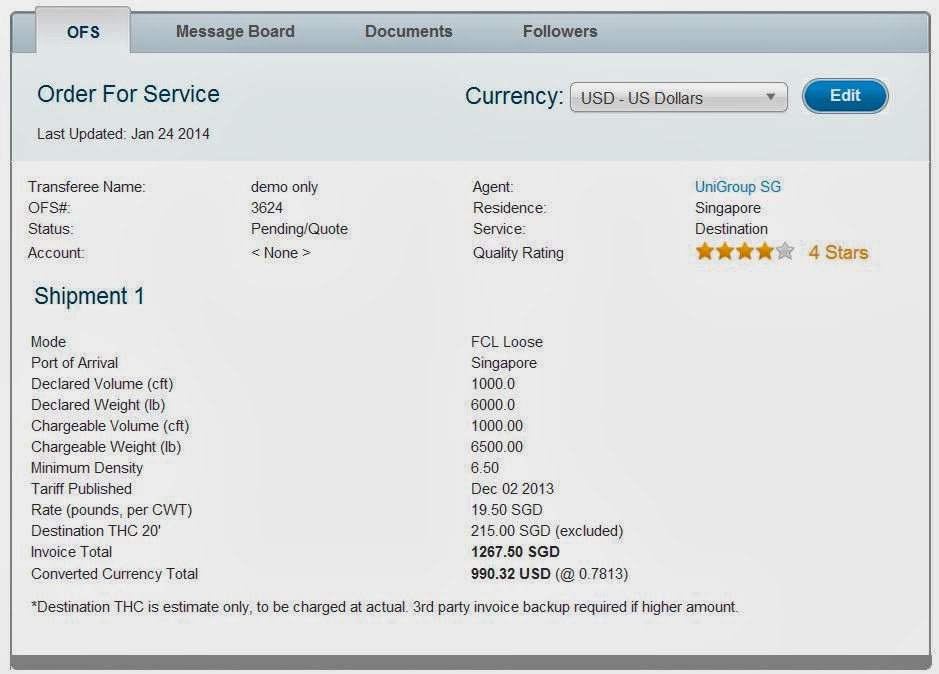 I think we all agree that reciprocity is a pillar of the industry. We therefore took reciprocity into consideration with PricePoint's current design (and we have big ideas on future enhancements as well). Currently, PricePoint provides advantages to our client-users in terms of boosting reciprocity opportunities from agents. This is partly based on the reality that reciprocity is not solely based on booked tonnage, but also on the influence of quotation activity, booked or not.

Email quotes are typically responded to by a pricing analyst/coordinator position. Such positions are usually not management-level, however, reciprocity is of course predominantly controlled by management. This means that the individuals who control reciprocity are often unaware of the full scope of agent quote activity. Making matters worse, email is a poor platform for monitoring, tracking, and measuring activity (see below, PricePoint is far better at this).

Static tariffs suffer from the same lack of visibility and measurement as email, but even more so. When an agent provides a static tariff, they will have almost no sense of how often the tariff is being used. I suspect this is one of the reasons that traditional static tariffs are not very popular (among other reasons)

In contrast, PricePoint provides tangible reciprocity-boosting benefits where traditional methods fall short. When an PricePoint client generates and saves a quote, PricePoint automatically sends a courtesy email to both the selected agent's listed Management contact as well as the applicable import or export coordinator contact (see example image below), as per the Agent Profile. In other words, even though you already have the instant price quote, PricePoint actively informs the agent that you are quoting shipments with them, without the time-consuming email quote request or having to wait for overnight reply. This activity as a booker helps keep your company more top-of-mind with agents who in turn have reciprocal tonnage.

By the way, savvy PricePoint clients may rightfully choose to issue multiple "pending" quotes to more than one agent on the same competitive move, which multiplies the top-of-mind influence factor. If the move becomes booked, they can then choose the actual agent to award the move to, and Book/Cancel the existing quotes accordingly.

Additionally, PricePoint keeps track of all quotes on the "Quotes Dashboard" (see image below). Clients can see all their quotes issued to various agents, and agents can see all quotes issued to them by various client bookers. The Dashboard can be easily searched and sorted for higher-level summary reporting purposes. Good luck trying to doing that with an email inbox!

One final side note on the prior point that unbooked quote activity can also positively influence reciprocity. Obviously actual bookings are more important, which raises the topic of closing ratio. If there is an overly large gap between number of quotes and number of actual bookings, a likely reason may be that the agent rates are too high. In such cases, the client can utilize PricePoint's revolutionary price analysis tool to discuss and negotiate better rates with their preferred agents. Meanwhile at the very least, PricePoint is saving everyone the time of manual quote request/responses on unbooked opportunities. Savvy agents are learning to use PricePoint as a pricing analyst that draws no salary!
Posted by Unknown at 3:02 PM No comments: